Heroku’s Cedar stack provides great flexibility in the type of processes you can run, including the ability to choose which application server to deploy.

I have been running thin, since it’s the recommended option and also the safe default, since that is what the app was running in the Bamboo stack, before migrating to Cedar.

However, I have read recently about getting better performance out of the same amount of dynos, and my interest was piqued. Before heading straight for Unicorn, I decided to give Puma, the new kid on the block a try.

I decided that for any benchmark to be meaningful for me, I would need to measure my app’s performance using all 3 servers. I used the default thin and puma configuration and used Unicorn with 3 worker processes. The app itself uses Rails 3.2.8, running on ruby 1.9.3, with a Postgres database and Memcached. I tested the homepage for the app, which is heavily cached and should only require a single DB query for the current user. All tests were run when the caches were warm.

To test, I used siege:

I used different levels of concurrency (i: 1, 5, 10, 20, 40, 80), testing each for 30 seconds and focused on the average response time for an approximation of performance. 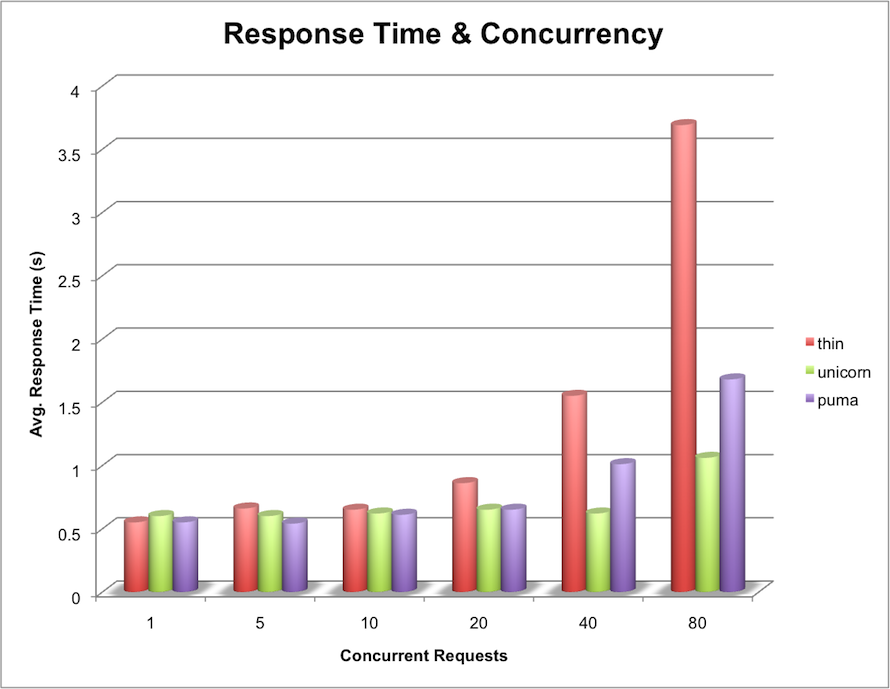 As the graph above shows, there doesn’t seem to be a significant difference in performance using the 3 different servers up to 10 concurrent requests. After that, thin starts performing much worse than puma or unicorn. Overall, it looks like unicorn is a better bet. Of course, YMMV depending on your system’s particulars.

UPDATE: I recently took unicorn and puma for another spin