MRI Ruby has gotten a lot faster since I ran my last benchmark, so it’s time for an update.

The benchmark consists of hitting a single endpoint on a rails (4.1.1) app in production mode for 30 seconds. The endpoint reads a set amount of posts from a Postgres database and the renders them in a html view using erb, without any view caching.

The purpose of the benchmark to get an idea of the performances characteristics under varying load for MRI and jRuby. Unicorn was chosen for MRI because it uses the unix fork model for it’s processes, which is pretty much the de facto way to do concurrency in MRI. Puma was chosen for jRuby because it bills itself as a very efficient threading server (although recent versions can mix forking workers and threading). Threading is the de facto way to do concurrency on the JVM.

Of course, there are many parameters that can be tweaked in the server configuration. No benchmark is perfect, but I believe it’s a good indication of what type of performace differences can be seen in the two versions on ruby.

Here are the details:

The number of unicorn workers where used in order to match the amount of memory used by puma. In both cases, the observer memory stays below a 1x dyno from Heroku (but not by much).

The benchamrk was run with Apache’s Benchamrking Tool, with varying levels of concurrency: 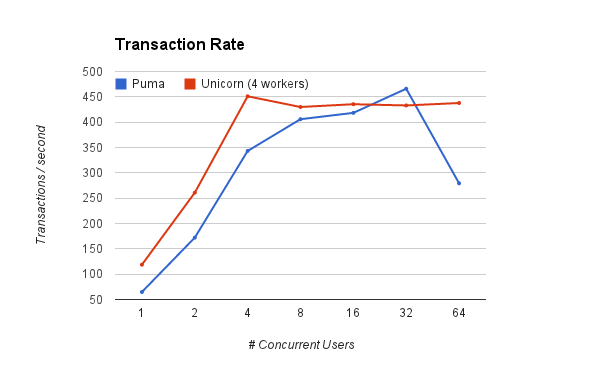 Both servers perform similarly in the number of request they can handle per second. Unicorn seems to ramp up on par with it’s number of workers and then plateau. Even though more users are hitting the endpoint concurrently, unicorn just handles 4 at a time. Puma seems to increase in capacity with more users, although there is a sharp drop-off 1 at the end when reaching 64 concurrent users. 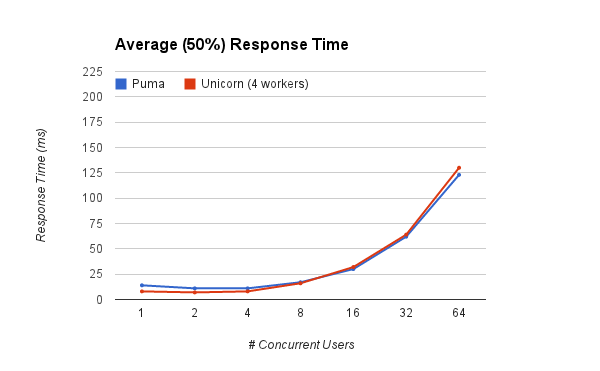 With regards of average (or 50th percentile) response time, it looks like both servers, surprisingly, perform exactly the same!. The response times are significantly slower when the server is under heavier load, but still perform acceptably. 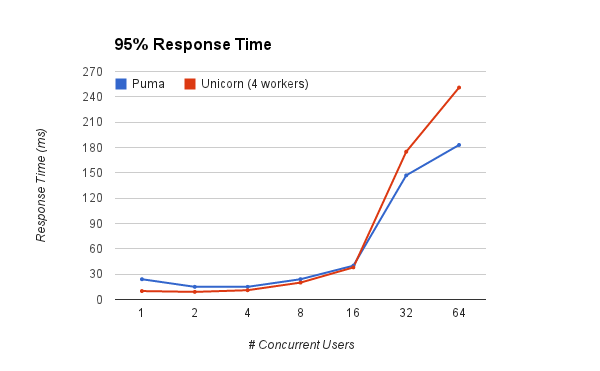 The 95th percentile and 99th percentile graphs paint a different story though: Unicorn’s response time start to get more pronounced as concurrency increases, wich means that for some of the users, it might easily fall into unacceptable levels.

Since the benchmark was last made, MRI Ruby has gotten much faster (last version was running in 1.9.3), however running a Rails app in jRuby still offers some performance characteristics under high load.